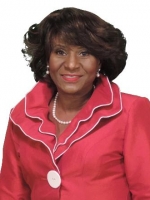 Apostle Dr. Mamie J. Smith is an apostolic voice called to the nation. She is the founder and Senior Pastor of the New Generation Christian Fellowship Church in Griffin, Georgia. She is a visionary, prophet, evangelist, pastor, teacher and a great leader.

She is an anointed enthusiastic motivational teacher of the Word of God. She delights in seeing lives changed, new converts committing their lives to Christ, and believers living a victorious
life. She submitted to the call of God and became a “Triple-A Woman’, Anointed, Appointed, and Approved by God to minister to the brokenhearted and set the captives free.

She ministers with great compassion and her prophetic insight reveals the true heart of God and compels listeners to respond and know God in His fullness. In fulfilling the call of God, she is
transparent in ministering. She has a passion for ministering to pastors, pastor’s wives, ministers, pastor’s children (PK’s) and mentoring sons and daughters in ministry.

She is a graduate of Beulah Heights University, in Atlanta, GA. where she was mentored by Dr. Douglas Chatham. She has appeared on TBN’s “Praise the Lord,” and Atlanta Live TV-57. In 2009, Dr. Smith received an honorary doctorate from St. Thomas Bible College, Jacksonville FL.

Dr. Smith is the mother of four adult children, four grandsons, one stepson and daughter-in-law. She makes her home in Fayetteville, GA with her loving husband, Dwayne.