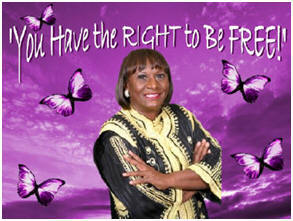 New Generation Christian Fellowship Church was birthed out of the travailing pains of our Senior Pastor, Apostle Mamie Harris. In February 1987, she answered the call to minister to women by establishing the Victorious Women's Fellowship. In 1990, she acknowledged her calling to ministry and was licensed in May of 1992, and was ordained in May 1996 as a minister of the Gospel to serve the Lord at New Hope Baptist Church, Griffin, GA. She knows without a doubt God has called her to minister to the broken-hearted, and to set the captive free, according to Luke 4:18-19. “You Have The Right To Be Free!"

In December 1996, after the sudden death of her late husband, the Rev. Joseph Harris, then Senior Pastor of New Hope Baptist Church, of Griffin, Georgia, she yielded to her passion for the ministry. Apostle Harris made a conscience decision, and took a leap of faith, forsaking a lucrative career with the U.S. Office of Personnel Management (OPM) with 18 years of service, to fulfill the call upon her life.

Later that same year, through Mamie Harris Outreach Ministry, she began holding fellowship services at Ashford Place Apts. on Carver Rd., here in Griffin, GA. In doing so, God gave her a vision to reach the lost at any cost. To train and empower believers to develop and become an effective part of the "Five-fold" ministry team, according to Ephesians 4:10-11. Because of her faith in God, and because she believed that she would receive the promise of God, "that the people would come", she activated her faith, and stepped out on that promise, the people came and yet continue to come.

In February of 1998, New Generation Christian Fellowship Church, Inc., was birthed and formally established as a church body, and certified by the State of Georgia as a 501(c) (3), Non-profit Organization.

From February of 1999 thru January 2003, New Generation relocated 3 times to reflect the continued growth of our congregation. During this time of transition, Pastor Harris was ordained as an Apostle in 2002, and also ordained many to the ministry as Elders, Ministers, and Deacons. The New Generation Anointed Voices released 2 CD's and Ken Harris released 1 CD. "What A Mighty God We Serve!!!"

Finally, in January of 2005, 7 years later, with faithful, consistent prayer and standing firm on the Promise of God, He brought us back full circle. The property once owned by Faith Temple now belongs to the New Generation Christian Fellowship Church, and it is here that we stand at 1344 North 9th Street, in Griffin, Georgia. "All Glory goes to GOD!!!"